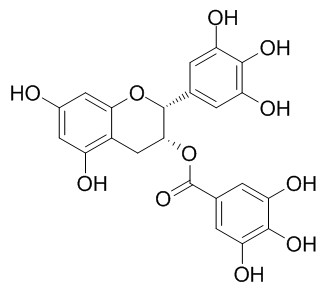 (-)-Epigallocatechin Gallate is an antioxidant polyphenol flavonoid form green tea, and inhibits the activation of EGFR, HER2 and HER3, with antitumor activity. (-)-Epigallocatechin gallate treatment enduring to cardio protection at mitochondrial level, it has protective effects against βA-induced neuronal apoptosis through scavenging reactive oxygen species, which may be beneficial for the prevention of Alzheimer's disease.
Inquire / Order: manager@chemfaces.com
Technical Inquiries: service@chemfaces.com
Tel: +86-27-84237783
Fax: +86-27-84254680

Catalog No: CFN98020
CAS No: 20194-41-6
Price: Inquiry(manager@chemfaces.com)
Mol Biol Rep. 2013 Dec;40(12):6533-45.
(-)-Epigallocatechin-gallate (EGCG) stabilize the mitochondrial enzymes and inhibits the apoptosis in cigarette smoke-induced myocardial dysfunction in rats.[Pubmed: 24197690]
METHODS AND RESULTS:
The present study brings out the preventive role of (-)-Epigallocatechin gallate (EGCG) on cardiac mitochondrial metabolism and apoptosis in cigarette smoke (CS)-exposed rats. The CS-exposed rats showed significantly decreased activities of TCA cycle enzymes and mitochondrial enzymatic antioxidants, on the other hand, mitochondrial lipid peroxidation was increased and GSH level was decreased. Further, CS exposure was found to induce cardiac apoptosis through release of cytochrome c into the cytosol, cleavage of pro-caspase-3 to active caspase-3, up-regulation of pro-apoptotic (Bax) and down-regulation of antiapoptotic (Bcl-2) molecules. The CS-induced apoptosis was further confirmed by mitochondrial and nuclear ultra structural apoptotic features as evaluated by electron microscopic studies. (-)-Epigallocatechin gallate supplementation shelters the activities of TCA cycle enzymes and antioxidant enzymes, with concomitant decrease in lipid peroxidation and increase in GSH level. (-)-Epigallocatechin gallate administration inhibited apoptosis through the inhibition of cytochrome c release into cytosol, activation of pro-caspase-3, down regulation of Bax and significant up regulation of Bcl-2. (-)-Epigallocatechin gallate reversed the ultra structural apoptotic alterations of mitochondria and nucleus.
CONCLUSIONS:
The present study has provided experimental evidences that the (-)-Epigallocatechin gallate treatment enduring to cardio protection at mitochondrial level.
Endocrinology, 2000, 141(3):980-7.
Modulation of endocrine systems and food intake by green tea epigallocatechin gallate.[Pubmed: 10698173]
Green tea polyphenols, especially the catechin, (-)-Epigallocatechin gallate (EGCG), have been proposed as a cancer chemopreventative based on a variety of laboratory studies.
METHODS AND RESULTS:
For clear assessment of the possible physiological effects of green tea consumption, we injected pure green tea catechins ip into rats and studied their acute effects on endocrine systems. We found that EGCG, but not related catechins, significantly reduced food intake; body weight; blood levels of testosterone, estradiol, leptin, insulin, insulin-like growth factor I, LH, glucose, cholesterol, and triglyceride; as well as growth of the prostate, uterus, and ovary. Similar effects were observed in lean and obese male Zucker rats, suggesting that the effect of EGCG was independent of an intact leptin receptor. EGCG may interact specifically with a component of a leptin-independent appetite control pathway. Endocrine changes induced by parenteral administration of EGCG may relate to the observed growth inhibition and regression of human prostate and breast tumors in athymic mice treated with EGCG as well as play a role in the mechanism by which EGCG inhibits cancer initiation and promotion in various animal models of cancer.
Life Sci. 2001 Dec 21;70(5):603-14.
The green tea polyphenol (-)-epigallocatechin gallate attenuates beta-amyloid-induced neurotoxicity in cultured hippocampal neurons.[Pubmed: 11811904]
Previous evidence has indicated that the neuronal toxicity of amyloid beta (betaA) protein is mediated through oxygen free radicals and can be attenuated by antioxidants and free radical scavengers. Recent studies have shown that green tea polyphenols reduced free radical-induced lipid peroxidation.
METHODS AND RESULTS:
The purpose of this study was to investigate whether (-)-Epigallocatechin gallate (EGCG) would prevent or reduce the death of cultured hippocampal neuronal cells exposed to betaA because EGCG has a potent antioxidant property as a green tea polyphenol. Following exposure of the hippocampal neuronal cells to betaA for 48 hours, a marked hippocampal neuronal injuries and increases in malondialdehyde (MDA) level and caspase activity were observed. Co-treatment of cells with EGCG to betaA exposure elevated the cell survival and decreased the levels of MDA and caspase activity. Proapoptotic (p53 and Bax), Bcl-XL and cyclooxygenase (COX) proteins have been implicated in betaA-induced neuronal death. However, in this study the protective effects of EGCG seem to be independent of the regulation of p53, Bax, Bcl-XL and COX proteins.
CONCLUSIONS:
Taken together, the results suggest that EGCG has protective effects against betaA-induced neuronal apoptosis through scavenging reactive oxygen species, which may be beneficial for the prevention of Alzheimer's disease.
P. Natl. Acad. Sci. U.S.A., 2002,99(19):12455-60.
Topical applications of caffeine or (−)-epigallocatechin gallate (EGCG) inhibit carcinogenesis and selectively increase apoptosis in UVB-induced skin tumors in mice[Reference: WebLink]
METHODS AND RESULTS:
SKH-1 hairless mice were irradiated with ultraviolet B (UVB) twice weekly for 20 weeks. These tumor-free mice, which had a high risk of developing skin tumors during the next several months, were then treated topically with caffeine (6.2 μmol) or (−)-epigallocatechin gallate (EGCG; 6.5 μmol) once a day 5 days a week for 18 weeks in the absence of further treatment with UVB. Topical applications of caffeine to these mice decreased the number of nonmalignant and malignant skin tumors per mouse by 44% and 72%, respectively. Topical applications of EGCG decreased the number of nonmalignant and malignant tumors per mouse by 55% and 66%, respectively. Immunohistochemical analysis showed that topical applications of caffeine or EGCG increased apoptosis as measured by the number of caspase 3-positive cells in nonmalignant skin tumors by 87% or 72%, respectively, and in squamous cell carcinomas by 92% or 56%, respectively, but there was no effect on apoptosis in nontumor areas of the epidermis. Topical applications of caffeine or EGCG had a small inhibitory effect on proliferation in nonmalignant tumors as measured by BrdUrd labeling (16–22%), and there was also a similar, but nonsignificant, inhibitory effect on proliferation in malignant tumors.
CONCLUSIONS:
The results suggest a need for further studies to determine whether topical applications of caffeine or EGCG can inhibit sunlight-induced skin cancer in humans.
FEBS Lett. 2015 Jan 2;589(1):77-83.
The green tea polyphenol (-)-epigallocatechin gallate prevents the aggregation of tau protein into toxic oligomers at substoichiometric ratios.[Pubmed: 25436420]
The accumulation of amyloid-beta (Aβ) and tau aggregates is a pathological hallmark of Alzheimer's disease. Both polypeptides form fibrillar deposits, but several lines of evidence indicate that Aβ and tau form toxic oligomeric aggregation intermediates. Depleting such structures could thus be a powerful therapeutic strategy. We generated a fragment of tau (His-K18ΔK280) that forms stable, toxic, oligomeric tau aggregates in vitro. We show that (-)-Epigallocatechin gallate (EGCG), a green tea polyphenol that was previously found to reduce Aβ aggregation, inhibits the aggregation of tau K18ΔK280 into toxic oligomers at ten- to hundred-fold substoichiometric concentrations, thereby rescuing toxicity in neuronal model cells.
Apterin