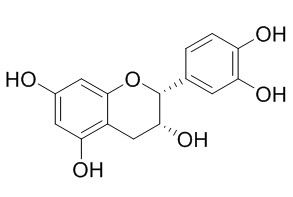 (−)Epicatechin is a flavonoid present in cocoa, green tea and red wine. It is a strong antioxidant, has antinociceptive, insulin mimic actions and improves heart health; it has the potential to increase CREB-regulated gene expression and increase GluR2 levels and thus modulate neurotransmission, plasticity and synaptogenesis. (-)-Epicatechin inhibits cyclooxygenase-1 (COX-1) with an IC50 of 3.2 μM; it inhibits the IL-1β-induced expression of iNOS by blocking the nuclear localization of the p65 subunit of NF-κB.
Inquire / Order: manager@chemfaces.com
Technical Inquiries: service@chemfaces.com
Tel: +86-27-84237783
Fax: +86-27-84254680