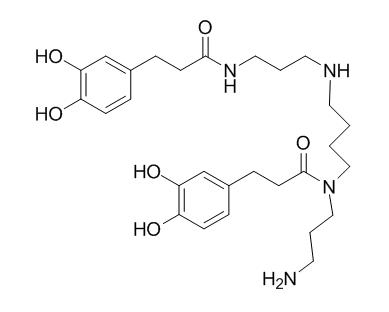 Kukoamine B is a potent dual inhibitor for both Lipopolysaccharides (LPS) and oligodeoxynucleotides containing CpG motifs (CpG DNA), LPS and CpG DNA are important pathogenic molecules for the induction of sepsis,are drug targets for sepsis treatment, thus kukoamine B is worthy of further investigation as a potential candidate to treat sepsis. Kukoamine B may potentially serve as an agent for prevention of several human neurodegenerative and other disorders caused by oxidative stress, it has protective effects against hydrogen peroxide (H2O2) induced cell injury and potential mechanisms in SH-SY5Y cells.
Inquire / Order: manager@chemfaces.com
Technical Inquiries: service@chemfaces.com
Tel: +86-27-84237783
Fax: +86-27-84254680