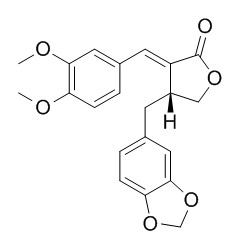 METHODS AND RESULTS:
From the methanolic extract of roots of spotted cow parsley (Chaerophyllum maculatum Willd.) a new lignan, named Kaerophyllin, has been isolated and identified as A-(trans-3,4-dimethoxybenzylidene)- beta-(3,4-methylenedioxylbenzyl)-gamma-butyrolactone.
CONCLUSIONS:
Its structure has been established on the basis of the analysis of UV, IR-, (1)H-NMR, (13)C-NMR and mass spectra.
cis-Mulberroside A