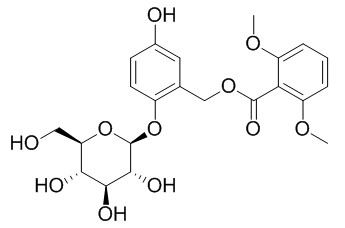 Curculigoside has potent antioxidant, anti-osteoporotic, immunomodulatory, and neuroprotective effects. Curculigoside can improve cognitive function in aged animals, possibly by decreasing the activity of AchE in the cerebra and inhibiting the expression of BACE1 in the hippocampus. Curculigoside exhibits potent inhibitory activity against matrix metalloproteinase-1 in cultured human skin fibroblasts, and increases the levels of ALP and Runx2 in osteoblasts under oxidative stress via anti-oxidative character.
Inquire / Order: manager@chemfaces.com
Technical Inquiries: service@chemfaces.com
Tel: +86-27-84237783
Fax: +86-27-84254680